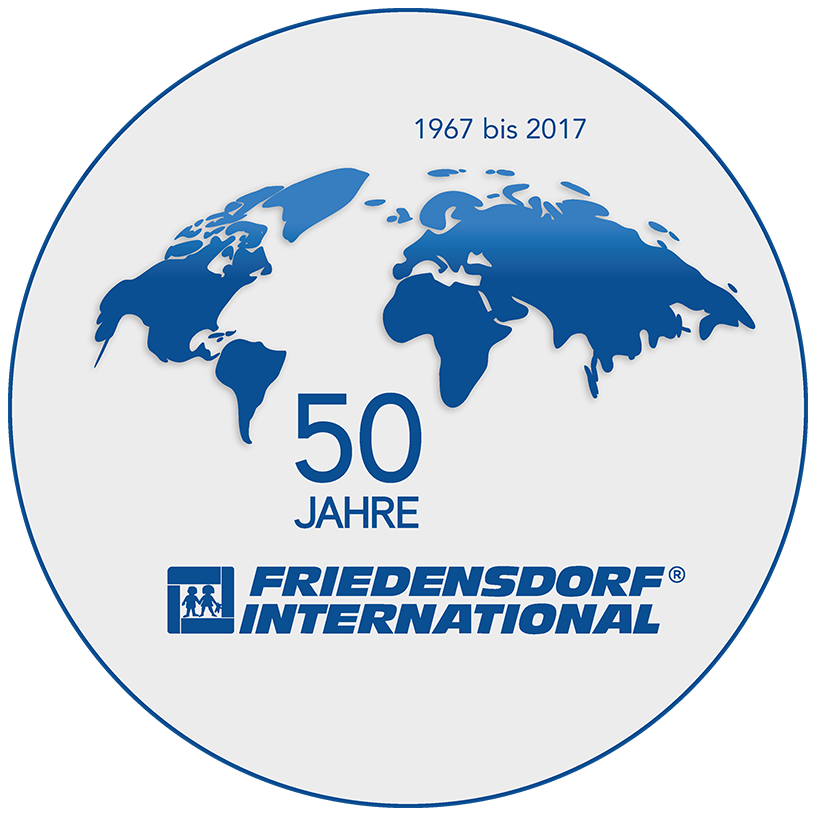 Since 1967 Peacevillage International has been helping the most innocent victims of war and conflict worldwide – the children. The three main areas of our work are:

The work of Peacevillage International is officially recognized as a charity and is financed almost exclusively by donations and membership fees. The donation seal of the DZI (Deutsches Zentralinstitut für Soziale Fragen – German Central Institute for Social Matters) confirms the responsible and effective deployment of donations.

Medical treatment taken for granted by people in Germany, is often an unaffordable luxury for those in areas of war and crisis. Wounds and illnesses cannot be treated properly, and people die from injuries and diseases that could be cured with medical treatment. The employees of the Peace Village have seen this time and time again since the founding.

It quickly became clear that children from areas of war and crisis must be brought to Germany for medical care. The idea of individual aid was born. This remains the essential purpose of the Peace Village. The young patients come mainly from Afghanistan , Angola , Central Asia and the Caucasus. From those war-torn regions and crisis areas we bring sick and injured children, who have no hope of receiving medical treatment, to Germany so that they can be cared for in European hospitals. Depending on the severity of injuries and sickness, the children are treated here for several months or in some cases for even years.

Once the medical treatment and the physiotherapy at Peacevillage International have been completed, all the children return to their homes and families. Within the financial framework of our individual medical aid work, approximately 1,000 children per year from all over the world are being helped. For many of those children it is the only chance of survival.

Providing aid to seriously ill and injured children in regions of war and crisis was and is the first work of the Peace Village. But projects on site at under-serviced regions have also been established. Clearly something had to be done to improve health facilities on a sustainable basis. And so for many years - in addition to individual aid - projects in children's home countries have been a second important pillar of the work of the Peace Village.

Support for aid projects is provided on site. Thanks to these projects, former patients of the Peace Village in Oberhausen, who have long returned home, stay in contact.

The primary goal of the projects is to provide better medical care to children and their families in their home countries. Peacevillage International builds Medical Base Stations, infirmaries, orthopedic workshops etc, provides financial and logistic support and then hands over the upkeep to local partner organizations. Relief supplies, medication and food are continually dispatched via container and truck to our partners from non-governmental organizations abroad – helping them to help themselves.

“We know that by bandaging the wounded, we have not stopped wars or established lasting peace in the world. We also know that world peace will not be achieved by itself. A new generation is needed, one that no longer think in the old spirit of enmity.”

This quote from the founding document of our organization, remains the motivation behind the work of the Peace Village Educational Training Centre. To meet the demand for holistic education and peace policy work, it’s not enough to focus solely on healing individual children directly affected by war.

The Educational Training Centre was therefore founded in 1986 with the statutory mandate to work on sustainable peace through education. The centrepiece of this work is the care of children and youth groups who visit the Peace Village. We offer seminars, exhibitions and events to provide an educational approach to peace by making political contexts transparent and by promoting social awareness.

Children and young people meet at our intercultural community centre to learn about the culture of the Peacevillage children and to work together actively in order to achieve a peaceful cultural co-existence – beyond their own front doors and in global context.

Accounts And Ways To Donate

Donations in any currency are very welcome. Send a check to our postal address, donate via money order to our account listed below or use the online donation form here (German version only).

You Can Find Us Here: